Summer is simply the perfect time to spend some time outdoors grilling over an open flame or sitting by the fire pit catching up with old friends. There is just something about the flicker and snap of a fire that is relaxing and soothing.

No matter how enjoyable the grilled steak or burgers are, or how great the conversation is around the fire pit, homeowners should still be very vigilant about safety.

Here are a few reminders this summer of how to both enjoy open flames outside as well as do it in a safe manner.

Location of the Grill or Fire Pit

Instant Alarm knows all too well how often a casual evening out on the deck can quickly turn into a house fire or, worse yet, a family tragedy.

The numbers are a bit jarring.

The National Fire Protection Association (NFPA) cites that an estimated 10,600 home grill fires are reported annually in the United States. Of that number, there are 100 fatalities and $135 million in direct property damage per year. In a month-by-month breakdown of when fires, stemming from grills and fire pits originate, the months of June, July, and August are by far the most prevalent.

The location of the grill or pit is one of the top concerns of fire professionals. Grills and fire pits should be placed at the very least 10 feet from a structure including a home, shed, or garage. Decks should be included in this as many decks are the wood source for a grill fire that gets out of control.

These sources of the open flame should never be left unattended even for a quick run into the house for something forgotten in the refrigerator.

It only takes a second for a grease fire to get out of control or a fire pit fire to spread to nearby grass. Always have an adult stay near the flame to keep an eye on the situation.

On a side note – children should be watched very carefully near grills and fire pits. No running, walking, or playing near an open flame! Parents should not have an infant or toddler in their arms while flipping burgers or checking on the fire.

Anyone with an outdoor grill or fire pit should have a fire extinguisher on hand. The quick reaction time of a homeowner can mean the difference between a home that is a total loss or a home that has little to no damage. 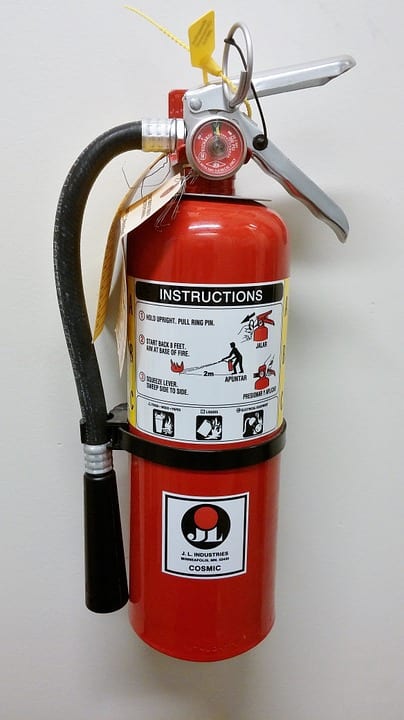 At the End of the Night

After the fire pit crew has left or the dinner has been grilled and served, homeowners must take action to ensure that the fire is, indeed, out. Douse the flames in the fire pit and remove the ashes, placing them in a metal container. Grills should be turned off and cleaned to avoid a grease build-up, which is a huge cause of grill fires.

In addition to these suggestions, we want to remind homeowners to be mindful of closing that can catch fire and not to use a flammable liquid to get the grill going. That is a recipe for disaster.